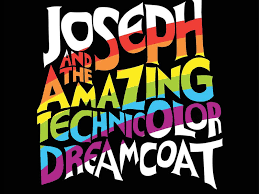 Running with Cows and Corn is a statement to grab your attention but those who know the work of Andrew Lloyd Webber will understand.

As lots of us have been hard at it putting in loads of hard work for marathons yours truly embarked on a marathon of a somewhat different kind which also has involved months of training. I took on a role in Joseph’s Technicolour Dreamcoat as Pharaoh, the Egyptian king, who Lloyd webber cast as Elvis – or maybe Elvis took inspiration from the original king? Who knows. Whilst I have been running I am not sure who to be, an athlete, a dancer or a singer and sometimes all three have a go, but the theatrical ones are not as quick as me. The training started months ago and has been building up as in marathon style getting more and more intense as the big event nears.

Like marathons it creeps up slowly at first then bang its here but in this kind there is no tapering. The last few weeks it has taken over everything. Instead of waking up and thinking of routes and what to eat and when I can fit things in, I have been waking at all hours singing the songs in my head (and not always my songs).

Combining roles of acting, singing, dancing and running has been somewhat of a challenge and if truth be known the running has taken a little backward step at the moment as I’m sure some will have noticed when flying past me in races but do not worry I have been taking names and I will be back. Only kidding.

Performance week is now upon us and in true marathon style I have just done my last long training run with headphones and my songs on repeat with cows and corn a plenty. Belting out songs in true Elvis style gets you funny looks I can tell you. Opening night is almost here and being on stage for longer than it takes to run a marathon will be a breeze (maybe).

The wigs and costumes will be exchanged for the Garmin very soon. Time to give all those over 55s a wake up call in the championship. Skip is coming back.